On hold for the bleak midwinter 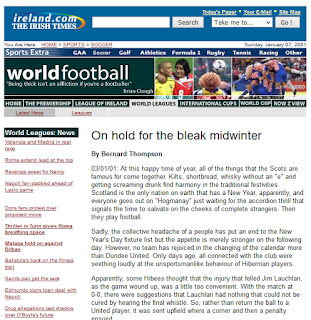 At this happy time of year, all of the things that the Scots are famous for come together. Kilts, shortbread, whisky without an "e" and getting screaming drunk find harmony in the traditional festivities. Scotland is the only nation on earth that has a New Year, apparently, and everyone goes out on "Hogmanay" just waiting for the accordion thrill that signals the time to salivate on the cheeks of complete strangers. Then they play football.

Sadly, the collective headache of a people has put an end to the New Year's Day fixture list but the appetite is merely stronger on the following day. However, no team has rejoiced in the changing of the calendar more than Dundee United. Only days ago, all connected with the club were seething loudly at the unsportsmanlike behaviour of Hibernian players.

Apparently, some Hibees thought that the injury that felled Jim Lauchlan, as the game wound up, was a little too convenient. With the match at 0-0, there were suggestions that Lauchlan had nothing that could not be cured by hearing the final whistle. So, rather than return the ball to a United player, it was sent upfield where a corner and then a penalty ensued.

The result was a last gasp winner for Hibs to leave angry Dundonians asking where the referee found the extra three minutes of play. All this is very frustrating of course, unless you happen to be a neutral  - when it is little short of hilarious. Not so funny was the reaction of United's goalkeeper Alan Combe, who is alleged to have attempted to headbutt the fourth official.

Still, you can now dust off your "auspicious sign" clichés, for the first match of 2001 brought unheard of joy to Tannadice. Their distress against Hibernian was forgotten about with a home win over Motherwell. It took Utd nearly ten months to win at their own ground in 2000 so there is at least some room for optimism in the City of Discovery.

It was a less happy start for Kilmarnock. With his famed eloquence, their manager Bobby Williamson, described his team's 6-0 defeat against Celtic as "the worst experience I've experienced" in football. From Killie, it was as shoddy an exhibition as has been seen since Paul McCartney displayed his paintings and when Williamson heaved Ally McCoist on at 5-0, the merciless home crowd's day was complete.

Larsson scored four as he continues to search for his best form. Sutton scored another couple to make the Celts' fans feel like world-beaters. That they are not but Scot-thumpers they most certainly are.

As far as the Celts go, though, the big story of the week has been the undignified exit of Allan MacDonald. MacDonald was supposed to be Celtic's answer to David Murray. There were, though, a few differences.

For instance, Murray owns most of Rangers whereas MacDonald was merely a boardroom figurehead. However, MacDonald left with generous parting shots at almost all of the people who supported him throughout his period of tenure.

He claimed that Celtic had already planned to sell Henrik Larsson, before his arrival, and that only MacDonald's intervention secured the future of the superstar who notched his 100th goal for the club on Tuesday. This has angered the shakers and movers at Celtic, not least Dermot Desmond who is singled out for special criticism.

MacDonald also claimed that Desmond preferred Joe Kinnear to Martin O'Neill as the Celtic manager. However, one figure from Celtic Park (the legendary "insider") disclosed to me that the allegations relating to Henrik Larsson were hotly disputed.

He responded that "Joe Kinnear was much closer to getting the Celtic job than even he probably realises" but that "Desmond was never against O'Neill". In relation to Henrik Larsson, he went on, "as far as the board were concerned, it was Allan who seemed to think that selling Henrik was a good idea because it would bolster the accounts from the start. The board felt compelled to back him in anything he did as he was a new appointment, but they also supported him when he was persuaded that the fans would not tolerate selling Henrik."

He went on that Desmond and the board view MacDonald's recent comments as "a betrayal as they feel that they supported Allan to the final full stop." If that is so, they have moved swiftly to deliver a "Not welcome" message to the former Chief Executive. "The word went out that Allan is effectively persona non grata at Celtic Park."

"They know that they can't really bar him but they want to make him aware that he is unwelcome." To that end, "MacDonald's Executive Club status is now void" and even his entry to the car park at the ground was to be "subject to negotiation." Of course, this is fairly standard fare when a major figure leaves Celtic.

MacDonald, for all his accusations, was a failure at Celtic and he seems to be unable to accept that as he attempts to maintain a reputation that will assure his continued success in the business world. Regardless of his jibes against Desmond, it does seem that it was the former Chief Executive who made many of the bad decisions at Celtic Park.

Now, the club even refuses to credit MacDonald with the appointment of Martin O'Neill, which they say was instigated by a "non-executive Director" which suggests that MacDonald was even less successful than his record suggests. When that record includes appointing John Barnes, you have a fair bit of explaining to do.

Anyway, enough of Celtic. The other Glasgow team defeated St Mirren, partly thanks to two goals from £12m Wonder-Norse, Tore Andre Flo. The 3-1 victory came as something of a relief to Dick Advocaat but St Mirren were in no condition to give the Ibrox club any pre-winter break blues.

Yes, the action now ceases so that the players can recharge their batteries, in preparation for the final push for glory. In other words, the Scots male must now revert to accordion-playing until the footy returns. It will sound awful for a few weeks but the result at New Year is magnificent.
Posted by Bernard Thompson at 23:47