Barry Ferguson has had his problems, but the Rangers skipper is not a trouble-maker, just an outstanding player, writes Bernard Thompson 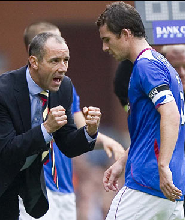 What's in an armband? Nothing, according to former Rangers manager Paul Le Guen;
everything, if you ask the player he stripped of the Token, or Walter Smith, who restored it to its rightful owner just days after returning to Ibrox. Even by the standards of Barry Ferguson MBE's turbulent career, the eight months since Le Guen attempted to sell him have been remarkable.

It is normally indicative of impending doom for any footballer when he is publicly reminded that "no player is bigger than the club". In Ferguson's case, however, it was obvious that a massive institution would be critically diminished by his exit.

But, "the trouble with Barry Ferguson", despite the claims of a leading Scottish football writer in his book on Le Guen's tribulations at Ibrox, was not so much that he failed to follow on-field orders - in fact, Ferguson's performances indicated that his instincts were more finely tuned than his manager's instructions. Nor that he supposedly had some grand plan to unseat the man whose appointment had been lauded by fans, the media and the player himself, though having spent the summer running a marathon across the sands of the Sahara, the Frenchman could be forgiven for wondering why players just had to drink alcohol at a Christmas party.

No, there was and is a real problem with Ferguson: he was then, as now, the one exceptionally gifted player in the Rangers ranks - and also a far better bet for the future than the Frenchman who had taken the club to third place in the SPL and 17 points behind Celtic.

And that's only part of it. If ever there was a player primed to be Rangers royalty, it was Barry Ferguson. As a star-struck 10-year-old, he was taken into the inner sanctum of Ibrox by his older brother Derek, who was later ousted by Graeme Souness due to his reputation as a hell-raiser. Barry has had his own flirtations with disaster, the most infamous being the Battle of Bothwell, when he found himself in an idiotic street-fight with Celtic fans after getting sent off in an Old Firm game. Then, many expected him to go the way of his sibling and other talented prodigies who lost their way, like Charlie Miller or Sandy Robertson. But an ultimatum from Dick Advocaat, who recognised a genuine talent, was enough to direct the player on to a more sensible path. He matured as a man and a footballer and became the club's youngest ever captain.

It was an extraordinary vote of confidence from Advocaat, who discarded the fans' cult hero Jörg Albertz because of his technical deficiencies and sold Rino Gattuso following the Italian's refusal to convert to a full-back role. Though the latter decision was football's equivalent of rejecting the Beatles, Ferguson's continued rise in stature indicated a level of ability that one of Europe's most demanding managers would comfortably support.

Ferguson's reputation has been unfairly sullied in the eyes of some onlookers. An inauspicious move to Blackburn, marred by serious injuries, prompted some Ibrox die-hards to question his loyalty - which is akin to querying the aristocratic credentials of the Prince of Wales.

A few even accused him of "crawling back" when he returned, the player citing his and his wife's desire to be closer to their families. In truth, both moves suited Rangers better than Ferguson - the sale helping to balance the books, the return bringing reassurance to a team that had been unable to replace him.

Ironically, given the fact that he was accused of failing to fulfil an attacking role for Le Guen, he is now showing long-forgotten ability to raid into opposition penalty boxes and has three goals from two league games.

This re-emergence is partially due to necessity - Rangers having failed to sign Paul Hartley or Scott Brown; and partially thanks to reasonable support from his team-mates. With Kevin Thomson in midfield and the assured combination of Carlos Cuellar and David Weir in central defence, Ferguson can now afford to move into positions that would have been calamitous in a team that trained without tackling and contained lightweights like Karl Svensson, Jérémy Clément and Libor Sionko.

But Ferguson is now also enjoying one of the few periods in recent years when he hasn't been playing through an injury or even delaying surgery for the good of the cause.

In modern football, he is a fashion disaster. He is the bad-boy who grew up. He articulates his intelligence on the field rather than the post-match tunnel or studio. You won't find him advertising shampoo or shaving gel and he has a wife and family, rather than a Wag. He is also driven by the out-moded desire to "play for the jersey" at a club he desperately loves.

He may be no Gerrard or Lampard, and southern critics will refer back - simplistically and forever - to his time at Ewood Park and sneer that he's just a big fish in a small pond. That suits Smith, because it's no exaggeration to say that all Rangers' current hopes rest on the shoulders - and hips and knees and ankles - of one of Britain's truly talented midfielders who simply believes that to captain his favourite club and country is the highest achievement to which he can aspire.

There is a classic Ferguson pose: with the ball at his feet, arms outstretched, urging team-mates, who never seem to be quite as quick of mind as him, to make offensive runs. If Rangers are to have any real success, he'll have to drag them up to his wavelength. He's capable of it.
Posted by Bernard Thompson at 17:47