Don't expect the Bhoys to sink

Celtic will still be very much the team to beat when the SPL season kicks off tomorrow, argues Bernard Thompson
Guardian 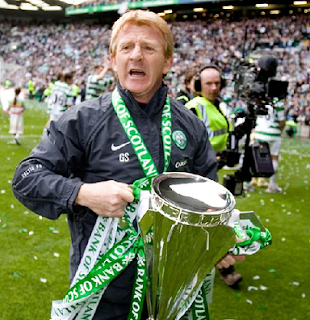 Recently, the Scottish Football Association repeated its warning to all SPL clubs that sectarianism and racism will lead to them being docked points.

Fans of teams other than Rangers and Celtic are chilled about the whole thing, believing that new sanctions will only be used against the two most powerful clubs in the land. But smaller clubs with cheaper lawyers have been made examples of before, it may yet happen again.

Celtic will win the league, of course, because frankly to predict anything other than a victory for the best squad in Scotland by far would just be plain silly.

More to the point is whether the Bhoys can again progress beyond the Champions League group stages (and they will have to beat Spartak Moscow to even qualify) and even maybe win a game away from home on the way.

After a season that owed much to Artur Boruc and Shunsuke Nakamura, both of whom are attracting interest from other clubs, new arrival Scott Brown should set the standard for other precocious talents such as Aiden McGeady and Derek Riordan. Gordon Strachan would like also to think that his six strikers (plus maybe Steven Naismith) could muster a decent goal tally instead of waiting for midfielders and central defenders to show them how.

At Rangers, much is expected of a squad full of new signings, if not exactly obvious match-winning stars. Pick of the new arrivals looks to be Carlos Cuellar in defence while Barry Ferguson remains clearly the club's best player by a country mile and, barring mishap, Kris Boyd will again be Rangers' and Scotland's top scorer. Lee McCulloch, Alan Hutton and Charlie Adam will undoubtedly be effective at SPL level but the club looks ill-prepared for a Champions League qualifying campaign.

Neither Hearts, Hibernian nor Aberdeen look to be strong enough to threaten the established order but all three should cause some sleepless nights in Glasgow. Theirs is a tale of three managers.

At Hearts, Anatoly Korobochka starts the season as favourite for the sack purely because of Vladimir Romanov's record of dispensing with personnel. But what has frustrated the Jambos most is their team's ability to play any Scottish side off the park only for off-the-field disruption to ruin their ambitions. There is no reason to expect change.

Meanwhile at Easter Road, John Collins faces a fight to establish his credibility as a manager after Hibs' players undermined him last season. He could also use some of the £9m accrued from transfers since the turn of the year, funds which have largely gone to stabilising the club's finances and paying for a new training centre. Hibs' biggest challenge will be to maintain their record of developing talented players having lost their youth academy director John Park to Celtic last season.

At Aberdeen, Jimmy Calderwood is tasked with extending an enviable record: six continuous seasons of improvement (four of them with Dunfermline). But after a third place finish last year, the Dons look to have hit their ceiling as far as the league is concerned, and would settle for a modest Uefa Cup run. But, after watching Hearts and Hibs win cups over the previous two seasons, Aberdeen fans are entitled to feel it could be their turn. They must overcome the loss of Russell Anderson to Sunderland but the experience and versatility of Jackie MacNamara should provide significant options.

The unfurling of the first division flag in Gretna's first-ever SPL match will be bittersweet, given that the club's proudest moment will take place without Rowan Alexander in charge. Ill-health forced Alexander to resign from his position as manager during the summer, having led Gretna through the lower leagues and to a Scottish Cup final place in 2006. New coach Davie Irons can only hope for the sort of early-season momentum that ultimately saved St Mirren last season and might just keep Gretna one place above the Saints to survive another year.
Posted by Bernard Thompson at 17:45