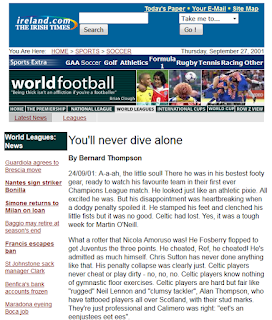 A-a-ah, the little soul! There he was in his bestest footy gear, ready to watch his favourite team in their first ever Champions League match. He looked just like an athletic pixie. All excited he was. But his disappointment was heartbreaking when a dodgy penalty spoiled it. He stamped his feet and clenched his little fists but it was no good. Celtic had lost. Yes, it was a tough week for Martin O'Neill.

What a rotter that Nicola Amoruso was! He Fosberry flopped to get Juventus the three points. He cheated, Ref, he cheated! He's admitted as much himself. Chris Sutton has never done anything like that. His penalty collapse was clearly just.

Celtic players never cheat or play dirty - no, no, no. Celtic players know nothing of gymnastic floor exercises. Celtic players are hard but fair like "rugged" Neil Lennon and "clumsy tackler", Alan Thompson, who have tattooed players all over Scotland, with their stud marks. They're just professional and Calimero was right: "eet's an eenjustees eet ees".

In truth, moans aside, Celtic did perform outstandingly well in Turin and the League form continued to hold up with a 2-0 win over Aberdeen. Now, though, they start from scratch against Porto. O'Neill's animated protests in Turin earned him a one-match touchline ban, to be served on Tuesday. Barring him from the dressing room, though, makes sense only in the minds of UEFA officials. I pray never to understand such logic. Celtic's away showings in Turin and Amsterdam suggest that a draw would not be disastrous but defeat would make their prospects look pretty gloomy.

At Ibrox, on the other hand, there are unconfirmed sightings of smiles. They caned Dundee Utd, 6-1, on Saturday and looked almost stylish in doing so. UEFA have just about seen sense and moved the tie with Anzhi Makhachkala, to a neutral venue, (albeit in a single-leg match) and if they get through the next week unbeaten, things might finally take a turn for the better.

Playing in midfield, rather than defence, Bert Konterman looks like a football player rather than a comedian. Fernando Ricksen has yet to have an emotional incident, this season. And the unfairly criticised Tore Andre Flo will have taken more confidence from his three goals at the weekend. All this with Barry Ferguson's return and the presence of Craig Moore gives Rangers a real chance of taking something from the first Old Firm game on Sunday.

As for our other European representatives, Hibs indulged in second-half panic against an AEK Athens side that they were coming to grips with to make my backing of them look rather silly. Unabashed, and a frustrated Russian Roulette player, I am still going to stake everything on them somehow overcoming AEK, who have better players. Kilmarnock's 1-1 home draw with Viking Stavangar doesn't make them look like great bets to go through, either, but I will also stick with them to overcome. My motivation in this is to delay admitting that I was wrong until I have thought of a decent excuse for my poor judgement.

Even these disappointments pale next to the fate of Billy Davies. The first Scottish manager of the season to be mutually consented can curse his bad luck. Respected by his peers and admired by his subordinates, he had produced decent results before the wholesale selling of his squad. His team were also fitting standard-bearers for the town of Motherwell: dull, depressing and often absolutely filthy. On the bright side, it is claimed that Marius Lacatus and Walter Zenga are among 40 serious candidates to have expressed an interest the job. Others include Harvey, Sasquatch and Howling Jake from my local boozer.

Finally, sincere thanks to those big lumps in the international rugby scene. I had considered panning Martin O'Neill for losing his head in Turin but nothing makes me appreciate association football as well as rugby union's contemptible game. My upper lip is snarled, not stiff. I want to hear songs slandering referees, not "Bye Bye Blackbird". And in my book, tunnels are for pushing and shoving opponents - not applauding them.

For all the current whines about cheating, it is in football that players can say, "I took a dive - get over it." It is in the game of soccer that managers blow fuses while apoplectic fans vent spleen at the pitch or throw tellies out of windows. There is a passion, a spontaneity and, damn it, an honesty that the jolly good show of 15-man rugby will never elicit. So keep chopping them down, Neil. Splutter your words of anger, Martin. And you Chris, as long as you play for Celtic, dive on. And you'll never dive alone.
Posted by Bernard Thompson at 18:49