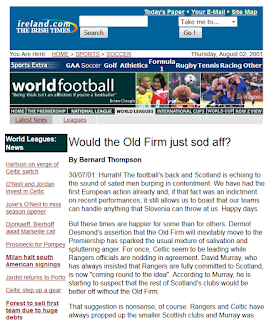 Hurrah! The football’s back and Scotland is echoing to the sound of sated men burping in contentment. We have had the first European action already and, if that fact was an indictment on recent performances, it still allows us to boast that our teams can handle anything that Slovenia can throw at us. Happy days.

But these times are happier for some than for others. Dermot Desmond’s assertion that the Old Firm will inevitably move to the Premiership has sparked the usual mixture of salivation and spluttering anger. For once, Celtic seem to be leading while Rangers officials are nodding in agreement.

David Murray, who has always insisted that Rangers are fully committed to Scotland, is now "coming round to the idea". According to Murray, he is starting to suspect that the rest of Scotland’s clubs would be better off without the Old Firm.

That suggestion is nonsense, of course. Rangers and Celtic have always propped up the smaller Scottish clubs and Murray was being more realistic when he predicted that eight to ten of them could go bust, even with the help of the big two. However, there is much talking to be done, although Celtic’s chairman, Brian Quinn, insists that everyone, to whom he has spoken, views the idea favourably.

One factor that must be overcome is the barring, from UEFA competitions, of any club that does not play in its own country’s primary league. It has emerged that the Welsh clubs, Swansea City, Cardiff City and Wrexham are currently banned because they play in England. Presumably, this would also apply to the proposed Atlantic League, which is still being discussed.

On the field, the start to the season was unusually good with at least three goals scored in every match. Dick Advocaat is already planning for the contest with Fenerbahce, after Rangers' 3-0 away win over NK Maribor.

The Gers also beat Aberdeen by the same score, at Pittodrie, in a match that, for once, failed to explode into a blood-letting. The Rangers goals came from each of their new signings, Christian Nerlinger, Russell Latapy and Claudio Caniggia and there is room for hope at Ibrox. If they can steer clear of unrest or misfortune, for a few weeks, they look certain to challenge very strongly for the title, this year.

Celtic’s own 3-0 win, over St Johnstone, was unspectacular but efficient. The result was less talked about than the speculation about whether the club or certain players would be moving. Stephane Mahe seems to be bound for Hearts as may be either Jonathan Gould or Stewart Kerr. The latter two are redundant at Celtic and Hearts, who are set to sell Anti Niemi, need a replacement urgently.

But who is coming in? Matt Elliott is touted as a stick-on certainty to sign this week while O’Neill’s admiration for the Battler of Wounded Knee, John Hartson, endures. Unfortunately, with a Champions League transfer deadline looming, Coventry seem to be trying to turn the screw by demanding "seven million of your Scottish pounds". Also mooted are moves for Fiorentina’s Moreno Torricelli and Tomas Repka as well as Magnus Hedman.

Now, all of this Old Firm stuff is pretty much par for the course in the Scottish Premier League. However, it would be remiss to fail to highlight two far rarer events. Firstly, Livingston played their first ever top division game and won it, beating Hearts by two goals to one. Livingston look like providing a model for success with a small club, much of it based on stadium development, and they have a real chance of sustaining SPL status.

But the first leaders of the SPL are Dunfermline. The Pars, who are managed by the talented Jimmy Calderwood, beat probable relegation candidates, Motherwell, by five goals to two. It will probably be the only time, this season, that neither Celtic nor Rangers are top dogs so the fans in the Kingdom of Fife are entitled to live royally for a few days. However, I wonder if this brief success might prompt greater hedonistic dreams: "We could be Scottish Champions if the Old Firm would just sod aff!"
Posted by Bernard Thompson at 18:42 No comments: