Oh, to be Irish in Paradise 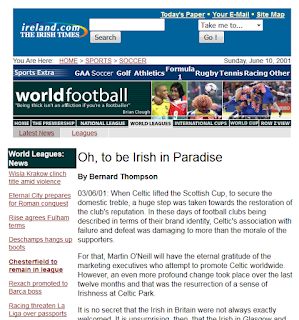 When Celtic lifted the Scottish Cup, to secure the domestic treble, a huge step was taken towards the restoration of the club's reputation. In these days of football clubs being described in terms of their brand identity, Celtic's association with failure and defeat was damaging to more than the morale of the supporters.

For that, Martin O'Neill will have the eternal gratitude of the marketing executives who attempt to promote Celtic worldwide. However, an even more profound change took place over the last twelve months and that was the resurrection of a sense of Irishness at Celtic Park.

That began to change in the Fergus McCann era. With the "Bhoys Against Bigotry" campaign, McCann made genuine, well-intentioned efforts to distance Celtic from sectarianism but, at times, the political correctness seemed to resemble a symbolic cleansing of Celtic's image. In a country in which singing The Soldier's Song is regarded as bigoted behaviour, there was a suspicion that Celtic were trying to eradicate all mention of Ireland.

But McCann's departure enabled the first of three extremely influential Irishmen to come to prominence. Dermot Desmond became the club's major shareholder and the most powerful man at Celtic. In terms of popular perception, little changed. Desmond always suffered by false comparisons with David Murray at Rangers. The Scottish press have tended to expect Desmond to match the spending - and high-risk strategy - of Murray, despite sound legal and structural impediments on his doing so.

Still, it is easier to convey, to the general public, the simpler message: "If Rangers can do it, why can't we?" With Desmond's reluctance to embark on any personal PR campaigns, there was little fresh enthusiasm for Ireland amongst the support, a substantial part of which complied with the "denial of roots" culture.

That has changed since the appointment of Martin O'Neill. No breast-thumping patriot, O'Neill is an unlikely leader of a reawakening of ethnic consciousness. Nevertheless, he is unafraid to be seen for who and what he is. In many ways, his expression of Irishness that is neither apologetic nor ostentatious is precisely what Celtic should have been aspiring to in the reinvention of the club.

There is also more to his importance in this matter than his success. The quiet, dignified but strong personality that O'Neill transmits to the supporters contributes to making him the first manager since Billy McNeill, to fulfil the role of icon, which Celtic fans crave.

Part of O'Neill's success has been his ability to appear to be a father-figure to the entire Celtic community. In that atmosphere, it is unthinkable that the Irishness of Celtic could be undermined.

The next link in the chain came with the purchase of Neil Lennon. There are Celtic players who are more talented than Lennon but few who are more effective and he has no peers in terms of commitment. The fact that he rejected a higher salary to articulate his passion for Celtic began a process of endearment that could see Lennon accede to legendary status.

The taunts and threats that the move brought on him only strengthened a level of support that was already bordering on hero-worship. If ever a player looked to be a likely captain of any club, it is Neil Lennon with Celtic.

But could he yet have one more rival? Roy Keane's avowed desire to play for Celtic presents another intriguing prospect. There is a (perhaps misplaced) general presumption that Keane's undoubted ability equates to Martin O'Neill's desire to sign him. But, if Keane should become a Celtic player, while still at his peak, the level of Celtic hysteria might threaten to overwhelm even the captain of Ireland.

Let there be no doubt that Celtic is a Scottish club. At the same time, there are lessons to be learned from a recent academic study, which compared the experiences of Irish Scots with those of American blacks. It also found that anti-Irish hostility engendered a hesitancy in acknowledging Irish heritage. Perhaps, then, people at Celtic could be forgiven for paraphrasing James Brown: "Say it loud - Irish and proud."
Posted by Bernard Thompson at 18:34