Could he be the Celtic Messiah? 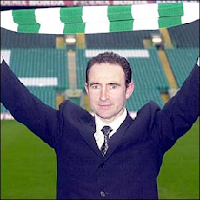 The qualities of Martin O'Neill are myriad. That has been obvious to anyone who has taken a passing interest in Scottish football, this season. He has a level of intelligence that causes media hacks to be more than a little guarded when laying the camouflaged man-traps that often pass for questions to Old Firm managers.

He has motivational powers that are certainly not lessened by his ability to present himself as a man who is not to be messed around in any circumstances. For evidence of that look only to the vocal declarations of solidarity from a group of players, many of whom were less co-operative with the unfailingly well-mannered Jo Venglos or his naïve successor, John Barnes.

He knows a bit about football, too. Winning 28 of 33 League matches, the quickest Scottish championship win since 1975, a League Cup and probable treble were not widely predicted of the team that was 21 points off the pace in 1999-2000.

And, clearly, he is also observant but wise enough to resist making provocative remarks. O'Neill chooses his words carefully and, when his comments are examined, a level of discipline is evident that is worthy of someone with legal training. He actually says very little but consistently repeats the simple messages that he wishes to convey. So it is always interesting to attempt to decode some of his more subtle statements.

This week, he was discussing anxiety. He professed a degree of bemusement that Celtic fans should allow themselves to become so anxious and transmit this feeling to the players. For "anxious" read "like foot-stamping children" because the behaviour he refers to is not easily explained by simple tension.

Celtic's "long-suffering fans", as they are known in the press, do indeed deserve the victory that Martin O'Neill delivered to them. However, a large proportion of the Celtic Park crowd is so demanding as to suggest that they were not around in the dark days of the shack of misery that the pre Fergus McCann ground had become. Otherwise they would be more grateful for a championship, served with all the trimmings, and a little more forgiving of the failings of Tommy Johnson, who scored against Dundee and St Mirren to seal the title.

What must trouble the dreams of the Celtic manager is the fact that this euphoric crowd were not a million miles from being a baying mob, even as they reached the pinnacle of one of the most successful seasons in their club's history. O'Neill knows that he will never again be so strongly aided by a Rangers side which emulated last season's Celtic almost precisely.

With Rangers' draw against Hibs, they are now almost certain to progress to the Champions League, where their superior seeding will allow them a more favourable draw than the new Scottish Champions. That might allow a team that looks better on paper than on grass to exceed Celtic's progress in Europe to predictable dismay.

If all this sounds rather biblically apocalyptic, in an Easter week that should be a time of Celtic celebration, I make no apology. O'Neill, himself, chose to refer to his observance of Lent to bemoan his inability to celebrate with Champagne. He could also hardly have missed the latest and, no doubt, ecclesiastically inspired salutation to Henrik Larsson as the fans sang their hosanna's to Henrik Larsson (a.k.a Ghod, on fans' shirts), declaring him to be the "King of King's".

Martin O'Neill's rapid achievements, which certainly indicate a form of genius, have stimulated outrageous expectations. So, when he spoke of the anxiety of fans, who have touted him as the second coming of Jock Stein, perhaps he was really projecting that, come Easter 2002, he could face demands to prove that he really is the Celtic messiah - something he has never claimed to be.

Perhaps, then, his comments about the fans' emotional state reveal a concern that the crowd that could be so truculent at the height of their joy might one day be so fickle as to demand some Barabbas, if another miracle is not forthcoming. In short, his observation might best be translated thus: "If that's how they are when we win the League; if things go wrong, they'll crucify me."
Posted by Bernard Thompson at 18:48