Trials and travails of the Tartan Army 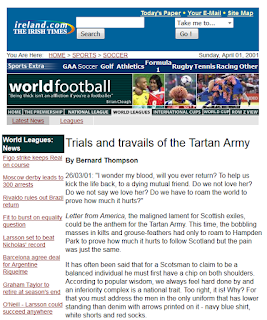 Letter from America, the maligned lament for Scottish exiles, could be the anthem for the Tartan Army. This time, the bobbling masses in kilts and grouse-feathers had only to roam to Hampden Park to prove how much it hurts to follow Scotland but the pain was just the same.

It has often been said that for a Scotsman to claim to be a balanced individual he must first have a chip on both shoulders. According to popular wisdom, we always feel hard done by and an inferiority complex is a national trait. Too right, it is! Why? For that you must address the men in the only uniform that has lower standing than denim with arrows printed on it - navy blue shirt, white shorts and red socks.

These custodians of our dreams test themselves in the only true measure of relative international worth. Forget economic greatness or scientific achievement and don't talk to me about gutsy Jocks walking through minefields during times of war. Soccer is all that matters to your average family member of "Jock Tamson's Bairns" and that doesn't breed a lot of cockiness in the Hampden horde. As a football team, the Scottish national side is close to useless.

Saturday's match with Belgium saw yet another chapter written in the slapstick history of soccer absurdity. Notoriously poor in attack, the Scots were a goal up after a minute. Billy Dodds slotted the ball in beautifully after a move that, had it been produced by Brazil, would have been described as not bad.

It was all going swimmingly well. The truly desperate Hampden turf was thwarting the Belgians' passing game quite nicely. The Scots scoffed that the Navy Blues don't need the grass to exploit the "aerial power" of Colin Hendry et al. Good old Colin won his 50th cap in a rude comment on the depth of available talent.

Then came a sublime moment. What physiological phenomena explain the reflexes of the human body? Why does one person react to a stimulus one way when another demonstrates an opposite reaction? Who cares? Eric Dayflarndra's wretched instincts caused his hands to come together in front of him preventing the ball from bouncing off his chest. Penalty, red card, Dodds scores, slam-bam thank-you ma'am. Look out my sushi mat, mum, I'm off to Tokyo.

Then came the awful realisation. Scotland were in the feared commanding position. Still, it was not until Barry Ferguson was through on goal that the dastardly power of the honey trap was fully shown. There we were buzzing to 3-0 when Ferguson outdid Gordon Smith in his famous FA Cup Final miss for Brighton. Very soon our once-soaring wings were stickied until we were welded to the side of the jar waiting for sweet death.

Marc Wilmots's goal was the first to reveal another of those days was in the offing. Following him was van Buyton, whose equaliser could only have come in the last minute of injury time.

With trademark grimace, I made my way to a nearby bar where I hoped to find solace but even that was denied me. A one-eyed Belgian making the improbable claim that he had played a lot of football (about eight stones ago) chose me as a receptacle for his profusely expelled glee.

"I'm not being rude but Belgium are a lot better than Scotland," he said, and I could hardly argue. Some 60 minutes later, he temporarily excused himself with a parting shot: "Klos, Van Bronckhurst, Larsson and Valgaeren - your league's only good goalkeeper is German, the best midfielder is Dutch, the top striker is Swedish and you know where your best defender comes from. Ha, ha, ha - he's Belgian."

I did not see my Belgian friend again until, at closing time, I witnessed a barman kicking in the cubicle door in the lavatory only to reveal my erstwhile companion who had been slumbering with his trousers at his ankles. To a background of words in a foreign tongue, I left. Partial onlookers dispute the reason for my ungainly walk but I maintain that it was nothing other than the smug swagger of moral victory.

Roll on Wednesday night. San Marino, bring on your finest!
Posted by Bernard Thompson at 19:27