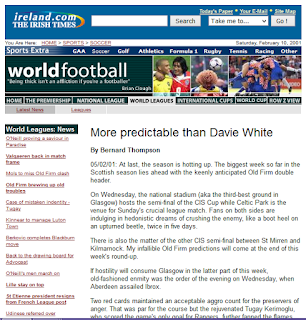 At last, the season is hotting up. The biggest week so far in the Scottish season lies ahead with the keenly anticipated Old Firm double header.

On Wednesday, the national stadium (aka the third-best ground in Glasgow) hosts the semi-final of the CIS Cup while Celtic Park is the venue for Sunday's crucial league match. Fans on both sides are indulging in hedonistic dreams of crushing the enemy, like a boot heel on an upturned beetle, twice in five days.

There is also the matter of the other CIS semi-final between St Mirren and Kilmarnock. My infallible Old Firm predictions will come at the end of this week's round-up.

If hostility will consume Glasgow in the latter part of this week, old-fashioned enmity was the order of the evening on Wednesday, when Aberdeen assailed Ibrox.

Two red cards maintained an acceptable aggro count for the preservers of anger. That was par for the course but the rejuvenated Tugay Kerimoglu, who scored the game's only goal for Rangers, further fanned the flames with public accusations of vile abuse.

Unbeknown to most, Tugay's mother died three months ago and he alleged that an unseen Dons player directed an obscene taunt relating to the matter. Equally offended are the Aberdeen players, who made convincing claims of ignorance of his bereavement.

Still, it sets things up for another bloodletting when the two sides next meet.

Indeed, Tugay has suddenly been launched to prominence, thanks to Rangers' injuries. He scored a scorcher against Dunfermline, with Michael Mols adding another. The match was Scotland's first pay-per-view encounter and the debate over whether such TV deals will kill or cure the Scottish game rages on.

Opponents of the scheme claimed divine intervention when thick fog in Perthshire caused Celtic's match with St Johnstone to be postponed minutes before the scheduled kick-off. That game was to have pioneered the television experiment but the plain grey screens made for a disappointing spectacle.

The postponement of the match also meant that Stillian Petrov could not serve his full suspension before the Old Firm league match.

Normal service for Celtic was resumed with a 3-0 win over Hearts at Tynecastle yesterday. The game itself was typical of Celtic's season in that Henrik Larsson supplied all of the goals yet again. The victory was not without cost, however, as Joos Valgaeren was stretchered off with a serious ankle injury.

Better news for Martin O'Neill came with Eyal Berkovic's decision to consider a loan move to Blackburn Rovers. With the imminent departure of Berkovic and the releasing of Daniel Prodan by Rangers, the musty scent of dead wood is gradually being lifted from Glasgow.

Possibly the worst signing in the history of Scottish football, Prodan failed to kick a ball for Rangers since arriving for £2.2 million sterling in 1998.

At Hibernian, much jollity accompanied Alex McLeish's decision to extend his contract until 2003. McLeish's success with Hibs has made him hot property and he had been linked with a clutch of major jobs in the past few months.

His sanity was openly questioned in 1998, when he left Motherwell for a Hibs side that was certain to be relegated. However, his reinvention of the Edinburgh club makes his the best managerial performance of the season so far. The securing of McLeish has also persuaded the iconic Franck Sauzee to extend his stay at Easter Road, where he believes that he may be manager some day.

Away from domestic football, there was excitement at the prospect of Scotland being a potential host of the World Club Championships. FIFA General Secretary Michel Zen-Ruffinen believes that the country would be ideal because of its small number of quality grounds and undisputed passion for the game.

Certainly, the enthusiasm for the tournament would outstrip that of the Brazilian debacle in which the locals refused to attend matches that did not involve their clubs. On the other hand, the teams from the host nation would probably not be regarded as the hottest favourites to make the final.

But now, to save you watching, I can tell you of the outcome of the two Old Firm clashes. I believe that the neutral venue will favour Rangers in the semi-final of the CIS Cup and that they will beat Celtic to provide the first real test for Martin O'Neill.

In the League match, I have become less convinced that Celtic will win but I stand by my conviction, chiefly because of home advantage. Even with the possible return of Giovanni Van Bronckhurst to Rangers and the probable loss of Celtic's Joos Valgaeren, I will take Celtic to deal the death blow to Rangers' championship challenge with a narrow victory in an angry game.

In doing so, I should offer one small caveat - in the form of a Scottish football fable. For part of Jock Stein's time as manager of Celtic, his counterpart at Rangers was Davie White. On the eve of a clash between the sides, both managers were asked for a prediction.

The first to speak was White, who tipped his side to secure a two-goal victory. Undaunted, Stein refused to speculate, warning that "only an idiot would ever try to predict the outcome of an Old Firm game."

If that is the case, in pre-empting two of them, I must be at least twice as clever as Davie White... I think.
Posted by Bernard Thompson at 23:55