Back to the drawing board for Advocaat 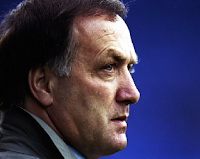 Those who have experienced Old Firm games understand that matches between Celtic and Rangers have unlimited potential to captivate, bewilder or appal.

Perhaps it is the aggressive nature of the city of Glasgow or the political and religious undertones of the rivalry that is apparently able to transmit itself to outsiders from all nations and cause them to abandon the lessons of experience and good sense.

It may be that the suspicion that "foreigners" cannot find it in themselves to care about the mere defence of "the colours" over-motivates the players on show until they resort to making decisions based on desperation and anger. Whatever the powers at play, last night's CIS Cup semi-final match was an example of how the entities involved have the capacity to hack notches in the totem of football history, irrespective of the personnel involved.

The match last night was expected to be little more than an enthusiastic warm-up for the more significant league encounter at Celtic Park on Sunday. What developed before the eyes of 52,000 supporters and millions of television viewers was one of the classic encounters of competitiveness and incident with both parties sacrificing the finer points of the game in determination that their will would prevail. In that, Celtic's victory was far more complete than the 3-1 scoreline.

The comment preceding the match fooled few. Dick Advocaat praised Henrik Larsson to an extent that was as gaudy as it was lavish. If he had hoped to emulate Bob Paisley in persuading his opponents' star player to believe in, rather than prove, his greatness his failure was complete. In the circumstances, Larsson's untouchable professionalism only confirmed the accuracy of the critiques offered by Advocaat and his young captain, Barry Ferguson. It was players such as Larsson who Kipling would have addressed as "a man, my son".

As for Martin O'Neill, he discussed the merits of fielding a weakened side with a detached confidence. If the injury problems that had prompted Advocaat to remind the world that he had only 15 fully fit players occurred to O'Neill, he managed to flit past the subject with virginal innocence. O'Neill would like his opponents to think of him as a naïve journeyman, content to take the hard knocks as part of a learning experience. He is nothing of the sort.

He may have abandoned the study of law to pursue a career in football but in the even more intellectually sophisticated field of interpersonal psychology, he is worthy of an honorary doctorate. There is a distinct impression from O'Neill that he could point a gun to your head and still persuade you to underestimate him. That particular analogy seems especially relevant to Dick Advocaat just now.

The victory that will be recorded in the record books belies a set of statistics that are far more significant than the imbalance of goals. More telling are the figures that will add to the disciplinary tallies. Against three yellow and one red card to Celtic players are eight bookings and two sendings off for Rangers yet there are Scottish teams that traverse the rules with more vigour and planning than they. But, as in their league match with Hearts, when Claudio Reyna and Arthur Numan were dismissed, Rangers demonstrated all of the symptoms of industrial stress to the point of breakdown.

After Celtic's opening threatened to overwhelm their opponents in an easy checkmate, Rangers seized on the opportunities of gifted possession to merit their goal if not the penalty that facilitated it. This was their chance to strike at the heart of Celtic's success this season - their belief. However, after the break, it was clear that O'Neill had been prolific with the hypodermic that has infused his team with a conviction that a protecting light shines upon them. Their resilience soon prompted a reaction of frantic despair among the Blues.

To his credit, Barry Ferguson, who was the chief offender in the first Rangers abomination on the occasion of the earlier Celtic Park encounter, has received the captaincy of his club and transformed himself from a potentially excellent player to a leader with the makings of greatness. But no monumental captain of the past could have reined in such panic in older men as was witnessed last night, when even the impeccable Michael Mols was prompted to aberrant behaviour.

The contrast with Celtic's ranks could scarcely be more stark. New to the experience, Neil Lennon nipped the heels of transgressing Rangers like a prize sheepdog relishing the work while the once vilified Ramon Vega portrayed a confidence that his gigolo looks would befit on yet another date. There was no self-doubt in Celtic.

Now all eyes turn to Celtic Park on Sunday. Rangers could win and the erratic Old Firm history gives them some succour. But for Dick Advocaat, who is proud of a record that has never seen him sacked, the prospect is daunting. He must force his players to employ a cold application that has evaded them on the key occasions this season. And he must find a way to freeze the trigger finger of Martin O'Neill.
Posted by Bernard Thompson at 18:32