Bad tidings from the ghost of Third Lanark

By Bernard Thompson
Published in the Irish Times online edition 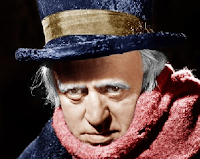 Bloody useless double-glazing! There I was in my nightshirt and bedcap, when a chill draught shrilled through me. I stepped miserably from my warm bed to quell the influx of air but could not evade a jangling sound.

I was bemused by the fanciful idea that it sounded rather like dragging chains when "Holy Moses, there's a man in my room!" The bottle of beer that I keep at my bedside for emergencies smashed with a froth as it sailed through the red tracksuited figure to the wall behind. "I am the ghost of Third Lanark", it moaned, "One-time decent Scottish football outfit, defunct since the sixties."

"And what do you want from me, chump?" I said, wetting myself with fear but petulant, nonetheless. "Learn from my mistakes," he said, "For there are other Scottish teams that could one day suffer my miserable fate." I now knew him to be quite mad as no one ever learns from mistakes so I was a little more respectful in my tone, "And what fate is that, Sir?"

"Who-o-o-o-ah, oh woe! Since I left this happy world, I have been forced to travel the grounds of the League of Ireland - I never miss a game." Now, I was truly scared. "You will be visited by three spirits this night. They will show you things past, present and yet to come. Heed them, he-e-e-d them!"

"Stick the heid in them given half a chance," I thought, but I kept my powder dry.

I reached for my Partick Thistle scarf, which banishes all things football but it was to no avail. In the corner stood a curly-haired man with goggle specs and a big woolly coat. It was Roger Mitchell, Chief Executive of the SPL.

"No, I'm just pre-match entertainment," he squeaked but his smile faded. He thrust open his coat and what do you think I saw? Two whimpering children sat at his feet, one in the red of Aberdeen, the other in Dundee United's Tangerine and Black.

"This Dundonian is hunger," he said "Yon Aberdonian is want. Fear them! For they are crap and it's not getting any better."

In a flash, he was gone and a decrepit, white haired, whiskered figure stood leaning heavily on his walking stick.

"I know who you are!" I pointed accusingly.

"So you should, for I have been around as long as the game of football itself."

It became clear to me, "You are Tom Boyd, ancient captain of Celtic FC, recently displaced by Ramon Vega."

"Do yourself a favour son," he replied, "Don't mention Vega." He transported me to Lisbon where crowds swarmed merrily on a football pitch. "Cellic are European Champeeons," said one, "Nae bother! We're the best team in the wurrld!"

In a trice, I was at a ground with two towers where a figure in dark blue was playing keepy-uppy on the wing. The fellow next to me laughed. "England, World Champions? Nae bother! Scotland are the best in the wurrld now, ya big …. Aye, you, Stiles!"

I had just deduced that I was in 1967 when I was thrust into the middle of a riot. Plastic bullets and tear gas spattered the air. I hid behind a particularly large combatant who bellowed "Show's yir Barcelona chapels. Cup-Winners' Cup for the Rangers - the best team in the wurrld!" <

And then I was in Gothenburg where a tearful Aberdonian turned to me and said, "We've won the Cup Winners' Cup. We beat Real Madrid! We must be the…" "I know," I cut in, "the best team in the wurrld."

"Forget this not," said Tom and he vanished faster than you could say "Airmiles?"

By the time the stubbled Italian spirit arrived, I was dressed for a holiday in yellow Hawaiian shirt and white shorts.

"Don't worry. Lorenzo can give you some fashion advice. Come with Lorenzo."

I was ill-equipped for the frosty ground of Dundee where jaunty lads in green and white were nonchalantly leaving the pitch as a bespectacled Irishman repeated "Fantastic, fantastic lads, fantastic."

A large crowd mixed chants of "4-0, 4-0" in a medley with copious obscenities and references to terrorism.

"This is Celtic and they top of the League. I dunno why," Lorenzo remarked.

"Celtic top of the League!" said I, "This is strange fruit indeed."

"Hah, you should see the oranges," said Lorenzo as I found myself in a room where there were several men in blue. "I eavesdropped the conversation."

"Gonnae speak English!" said one in a voice of broad Scots.

"Gonnae learn Dutch!" came the reply, as half of the room was awash with laughter.

"Let us not squabble, "said the latter, "We have beaten St Johnstone, 3-0. The year is done. Come now, a toast to the founder of the feast."

There seemed to be mixed enthusiasm as the assembled group raised teacups and oranges and echoed, "To Dick, the founder of the feast."

When I was finally met by a postman at my flat, he was not bringing the Christmas cards or cheques that I had hoped for.

"I'm just a part-time spirit. I'm also a postman and I play for Hearts. There are many like me," he revealed, "I must show you things of the future, as this old year and century ends."

There were almost too many things to relate. I saw football grounds with chains on the gates and "For Sale" signs in the car parks. I saw fathers telling tearful children that he could not afford to take them to the game but that he would pay a tenner so that they could watch the match on telly. There were men in suits with Celtic and Rangers crests grovelling on their knees.

One said "Oh English masters, let us into the Premiership. We can't get a European League started." A man flicked cigar ash at both and scoffed "Don't make me larf. How 'bout the Nationwide League?"

I saw celebrating Irishmen as their team had knocked a Scots side out of the UEFA Cup. "That bit's already happened," the spirit revealed.

It was all too much. I pleaded to be shown no more and, still shouting, I awoke. Imagine my joy when I discovered that there was yet time. "I have been given a gift!" I shouted from my window, "I will save this game preaching youth development, and League reconstruction. I will call for less League matches and fixture lists that accommodate European competitors. I will demand that skill be emphasised for school age footballers, with imported coaches if necessary. I will call for measures to encourage the playing of talented Scots. I will save Scottish football."

I made off, still in my Hawaiian shirt, and ran not caring if I would first reach Ibrox, Celtic Park or the Head Office of the Scottish Football Association. Alas, I never made it. I was lifted by some cop who would only say, "It's for your own good, son" and am now remanded in a secure hospital.

So if this message reaches anybody, please see that it gets to the powers that be. Just tell them that it came from Third Lanark.
Posted by Bernard Thompson at 18:40