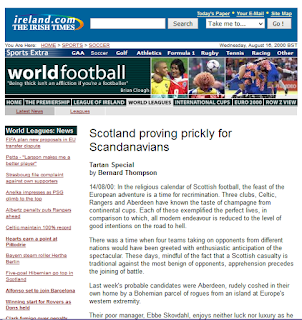 In the religious calendar of Scottish football, the feast of the European adventure is a time for recrimination. Three clubs, Celtic, Rangers and Aberdeen have known the taste of champagne from continental cups. Each of these exemplified the perfect lives, in comparison to which, all modern endeavour is reduced to the level of good intentions on the road to hell.

There was a time when four teams taking on opponents from different nations would have been greeted with enthusiastic anticipation of the spectacular. These days, mindful of the fact that a Scottish casualty is traditional against the most benign of opponents, apprehension precedes the joining of battle.

Last week's probable candidates were Aberdeen, rudely coshed in their own home by a Bohemian parcel of rogues from an island at Europe's western extremity.

Their poor manager, Ebbe Skovdahl, enjoys neither luck nor luxury as he tries to fashion half a team of coalmen into diamond miners. As is customary when someone is enduring acute embarrassment, there was the inevitable application of schoolboy snot from an opposite number who has yet to know the pressure of expectation without facilitation. If, as Roddy Collins says, Skovdahl's 55 years make him too old to manage a major club, he has, at least, a maturity that is commensurate with his age.

It was a poor week for Skovdahl all round. John Jensen, guiding force of Danish Champions, Herfolge, had hoped to take advantage of Rangers' poor form and uncertain defensive combination to announce his arrival to Europe with an unlikely win. That his side lost 3-0 on their home ground, making them the only team, this season, to fail to breach that back line was the fault of Skovdahl, apparently.

With a grace befitting an infant who had dropped his ice cream on a dirty part of the pavement, Jensen wailed that the advice given to him by Skovdahl was no good. Particularly disappointing was Skovdahl's observation that the Gers' German midfielder, Jorg Albertz, invariably strikes the ball in a straight line. This was reasonable enough as "The Hammer" routinely invites defensive walls and goalkeepers to accommodate his shots, battered with such force as to verge on the malicious. Curling one into the Herfolge goal was a dirty trick indeed.

Elsewhere, Hearts showed that Iceland's middle ranking clubs hold no fears for the Scots elite by despatching IBV Vestmannaeyjar (a household name in Iceland) in a 2-0 away victory.

For good measure, the Martin O'Neill dream was preserved with a four goal trashing of those giants of Luxembourg club football, Jeunesse Esch. These are dreamy times for Celtic fans. The spark injected to the side by O'Neill (already lauded in a song to match any Norwegian Eurovision entry) has caused the fans to start digging out their optimism. Not only did the team come from a goal behind to beat Kilmarnock on Saturday but the hitherto useless Bobby Petta turned in a showing that should have earned him the man of the match award.

A less dignified performance came from his club's Chief Executive, Allan MacDonald. MacDonald's time at British Aerospace seems to have given him a grounding in the arms industry that extends to dodging bullets. The weekend papers were full of quotes from him pointing out why Celtic's troubles in his period of tenure were the fault of Kenny Dalglish, who he appointed, and Fergus McCann, who appointed him.

The comments about Dalglish were particularly lame as MacDonald fed Dalglish's enemies in the tabloid media with ammunition to continue their tiresome attacks relating to the former Director of Football's holidays.

More constructive was the announcement that both halves of the Old Firm are now moving forward with the development of a European League. Previously, David Murray had been dismissive of notions that Rangers would participate in such a venture but he is now positive about the benefits that it can bring. The plan has had many names but the most commonly used is the "Atlantic League". The new set-up would encompass teams from Scotland, Portugal, The Netherlands, Belgium and probably some Scandinavian countries.

With such success against the challengers from Iceland, Luxembourg and Denmark, it is unsurprising that the Scots should feel ready to take on the big boys - and Aberdeen may yet overcome Bohs, to show that Caledonia is mighty indeed. If they do, expect the four defenders of the football faith to be ushered to the next round with the traditional Scots toast: "Here's tae us. Wha's like us? Damned few an' their aw deid!"

Posted by Bernard Thompson at 23:19