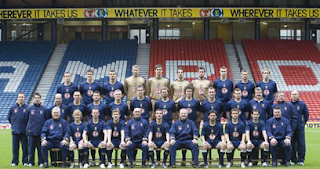 Alex McLeish knows exactly what he must do over the coming week: get three points from the games against Lithuania and France.

Anything less and he will be in the stocks for killing an admirable qualifying campaign, albeit one that has been based in no small part on one gloriously lucky win.

Four points or more and Scotland's third-most-capped player should get a Hall of Fame all to himself.

For other managers, the upcoming brace of internationals will present problems in terms of spreading resources - but not for Eck, whose chances of taking even a point from Parc des Princes on Wednesday are commonly understood to be on a par with the prospect of caging a Cottingley Fairy. There, his team will disregard such side issues as energy conservation or potential suspension and, if they want to, play good, old-fashioned, run-themselves-ragged, kick-everything-that-moves football.

Just when Scots were comfortable with the tag of perennial underdogs, a status that had alleviated managers like Walter Smith from the burden of expectation, Marcello Lippi had to go and open his big mouth about Scotland being "the fastest emerging country in Europe". So that's it - all of a sudden, beating the Lithuanians should be a doddle (especially as, unlike Scotland, they're overburdened with Hearts players).

Such tasks have broken men before but McLeish is refreshingly honest, straightforward and, dare one say it, Scottish in his approach: "The fact is, we have no choice but to go after them... we know we have to play at a good tempo and show aggressiveness from the start to get our supporters roused into the excited backing that is such a great help on these occasions."

Attack is precisely what this Scotland team is made for, even if the country's most expensive player will be standing in his own box for 90 minutes. But if the half-dozen players who will matter most on Saturday have commanded around the same amount as one Craig Gordon in transfer fees, that doesn't reflect their relative merits. In the enforced absence of Barry Ferguson, Scotland fans can expect to witness the first showing of the midfield pairing on which the nation's future aspirations will be founded.

Often disregarded in England (not least by the man who paid £9m for Gordon), Darren Fletcher has established himself as a reliable force for his country. In the recent friendly with South Africa, for example, he played the sort of deceptive pass to Kris Boyd that would have had the pundits cooing had he been representing one of the game's great powers.

Next to him, almost certainly in the centre, will be Scott Brown. Standing between Brown and an ascent to worldwide - even UK-wide - recognition are two demons: unthinkable catastrophe or paying too much heed to the hyperbole of his admirers. Nevertheless, it is not merely his talent, energy and self-belief that make Brown stand out among his contemporaries, but the sharpness of his offensive instincts, his ability to launch an attack within a nanosecond of having won the ball.

They will support a forward line that has no superstars but carries the sort of possibilities for variation that Steve McClaren might envy. Garry O'Connor will presumably start with Boyd, whose abilities will continue to divide observers even if he outlasts Stanley Matthews. Boyd does have shortcomings but they are unlikely to ever be displayed in his statistics for club or country .

While Scotland must be confident of a win on Saturday, it will be a surprise if Craig Beattie and Shaun Maloney do not also feature at some, perhaps crucial, point. Ungainly and injury-prone, Beattie nevertheless combines reasonable strength with a short burst of pace that takes him behind defenders and an eye for goal that, at present, seems to mark him out as a deputy to O'Connor in McLeish's plan.

Maloney, who in the absence of Kenny Miller is almost certain to feature as a substitute, has also been too familiar with the treatment table, a fact that has inhibited his progress. But for all-round skill and vision he is the most gifted Scottish forward and capable of playing as a forward, attacking midfielder or in the pocket, while also the country's best striker of the ball.

Scots national teams don't often respond well to optimism, the most memorable performances usually marrying endeavour, commitment and a whole lot of resentment. So, lest we get carried away, it is best to remember that the chances of being in a qualifying position in November are slim.

But what must give McLeish real hope is that almost all of his most important players are 25 or under and should be at their peak in the period leading up to 2010. It is, if you like, Scotland's golden generation, albeit perhaps only a nine-carat one. On Saturday, we should see the best of them. And next week in Paris? Mr Gordon, the stage will then be yours.
Posted by Bernard Thompson at 17:53