More than a game

Gordon Strachan reckons his latest misconduct charge is about societal rather than football issues, and it's hard to disagree 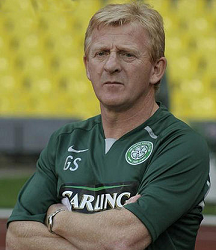 From bad boy to moral crusader; from discipline case to victim of injustice, Gordon Strachan's route to popular heroism has been unconventional, imaginative and, of course, very individualistic.

Just a few days ago, Celtic fans were still divided as to the merits of one of the finest managers of his generation, football officials were unsheathing their pencils and some sections of the media were expressing a mixture of impatience and disdain.

Such a short while ago, we would hardly have guessed that Strachan, a man with more fatal put-downs than a vet during a foot-and-mouth outbreak, secretly felt that "to be truthful, I like to be liked". If he had been in any way troubled about his popular standing, there was scant evidence of that in his adoption of a diplomatic approach that would make John Bolton look like Nicholas Parsons, employing the sort of pejorative language that would shame Simon Cowell.

Spitting contempt at one manifestation of phone-in culture, he was quoted in a Scottish newspaper saying: "What you should ask is who is posing the question? Not an intelligent person, that's for sure. It's someone who's sitting with his tracksuit on, his devil dug at his side and a can of Kestrel in his hand, maybe coked up to his eyeballs, shouting down the phone. I'm not answering to that. I'm not answering a question from Mr Ned."

Though he qualified his statement - by adding "thankfully that doesn't reflect on most Celtic fans ... when I meet people they're always pleasant" - and later reminded people that he once assisted Adrian Chiles with his phone-in programme on Five Live, he fully merited some of the criticism he received. It is one thing to caricature "unreasonable" football fans as boors but nobody is asked to undergo an IQ test before shelling out £50 on a club tracksuit top.

Besides, to suggest that the unintelligent, the uneducated or simply the underclass of Britain has a lesser right to express an opinion on the game they support through attendance and television subscriptions is simply offensive. But Strachan is on unassailable high ground when he points to the sheer hypocrisy of fans who believe that buying a ticket entitles them to exhibit the sort of behaviour that normally attracts ASBOs only to go crying to the police if there is even a slight response to their provocation.

"Fans should have a responsibility to behave themselves when kids are about. I find it horrific that they can shout all kinds of abuse and then look for the police to complain if somebody smiles back at them from the Celtic bench. It's a mad, mad world and I couldn't get my head round what was happening on Sunday ."

Strachan was referring to what appeared to be an absurd haranguing from an Aberdeen steward, a dressing-down to which he quite properly objected. But there's nothing like a whiff of persecution to rally the Celtic support and the fact that he was sent to the stand for a third time in his Celtic career for, he insists, defending his colleagues from an unreasonable attack has prompted a sudden burst of unconditional love. If his latest misconduct charge is causing him any anxiety, there is the unanticipated plus side that Strachan vs the Establishment is just the sort of battle Celtic fans love.

The manager himself is playing down any notion of a fractious relationship with the authorities, insisting that he expects the testimony of Sunday's referee and fourth official to be sympathetic. However, depending on the outcome of a separate pending appeal - after, in what looked to be an act of unpardonable pettiness, he was sent from the dug-out on the day his team was to be presented with the SPL trophy, apparently without explanation from referee Stuart Dougal - he could face an upcoming ban totalling 10 matches.

The two incidents combined now present the SFA with a headache. Dismissing both charges - and Strachan is adamant that he has done nothing wrong in either instance and Celtic are sure to defend him with their now customary robust legal counsel - could lead to the impression that he had been victimised by referees.

Strachan has often spoken out against "yob culture" and told the Celtic View: "It is not an argument with officials, the SFA, coaches, with players, the opposition. It is a moral argument that is outwith football." If more managers felt as strongly, fewer players might feel inclined to spend Saturday nights drinking and fighting.

If Strachan has learned anything from this experience, it will have been from the example of his assistant Tommy Burns who faced the media at the weekend with his boss reportedly too upset to speak. Burns, who as Celtic player, manager and coach has endured every type of insult that the most vindictive fan has in his arsenal, reliably faces the most sensitive situations with a quiet dignity that seems to enhance his personal stature but insisted: "The abuse that we've had to take in the last few games has been shocking."

In the past, some Celtic fans have been guilty of that type of behaviour, such as when some of them abused the memory of Davie Cooper in song, while the recent phenomenon of some Rangers fans trying to implicate Jock Stein in a child-abuse scandal is also beneath contempt.

Yet while the supporters of clubs outside the Old Firm often revel in a certain smugness that scrutiny seems to centre on only two clubs, perhaps football should wake up to the nature of some of the "banter" from other fans. Isn't time to kick yobbism out of football?
Posted by Bernard Thompson at 17:51