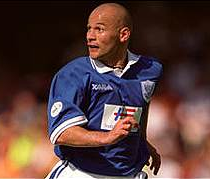 The future of Northern Ireland international, George O'Boyle is in doubt after accusations that he and St Johnstone teammate, Kevin Thomas, snorted cocaine on a Christmas night out.

Other players were also present on the night although it is understood that the allegations relate only to O'Boyle, 33, and 25-year-old Thomas.

It is understood the pair were reported to the club by a member of the public who was concerned at their behaviour. As yet, no drugs test has been carried out and no criminal action is expected.

A spokesman for Tayside Police said: 'We have not been formally informed of the incident… We are aware St Johnstone are considering disciplinary action against two members of staff following an allegation of them having misused an illegal drug.'

The pair have been suspended by the club, although both are expected to fight any moves to terminate their contracts and are taking legal advice.

A press conference, scheduled for yesterday was cancelled after both players refused to attend, claiming that they had not been given due notice.

SPL Chief Executive Roger Mitchell, said, "We have not been informed of the latest incident but we are aware of it. The SPL must remain neutral as far as specific players are concerned because they have a right of appeal.

But in general terms, we deplore everything to do with illegal drug taking." Mitchell went on to say that there is a possibility of drugs tests in Scotland increasing after the success of such measures in Italy.
Posted by Bernard Thompson at 18:33