In Scottish football, the term "great man" is jealously guarded. Busby, Shankly and Stein are acknowledged as men who performed the supernatural in the days of the true working class hero.

Try to add Alex Ferguson to the list and all manner of arguments begin. So, if the manager of the English and former European Champions must struggle to establish his credentials, then it is no surprise that Ferguson's Scots contemporary, Jim McLean, has become a target for disdain.

When Ferguson was challenging the supremacy of the Old Firm, McLean was in charge of a Dundee United side that seemed equally able to rock the foundations of the Scottish game. Between them, the east coast sides, were given the title of "The New Firm" in recognition of the belief that their tilt at the established order would be lasting.

Ferguson's successes are legendary but, with a League Championship, two League Cup successes, a UEFA Cup Final and a European Cup semi-final, McLean's achievements could stand comparison with any recent Scottish club manager. On Saturday, his 29 years with his beloved club came to an end in the most bitter of circumstances.

After a fans' protest outside the ground, McLean faced the television cameras to insist that he would not be driven from a team that he had supported before many of the cat-callers were born.

However, when questioned about the role of his brother, at the club, and the future of manager, Alex Smith, McLean, rashly, raised his fists to the reporter and later announced his intention to sever all links with United, in a public apology. His demise marked a sad end to the career of one of Scottish football's few truly remarkable figures.

When McLean took over United, they were an insignificant club, with no appreciable history of success. Established as Dundee Hibernians in 1910, they were known as the second club in Scotland's fourth city and of negligible importance. It was purely through McLean's understanding of football - an appropriate attribution of the word "genius" - that the Tayside club came to challenge, and often overwhelm, the established powers of Rangers and Celtic. 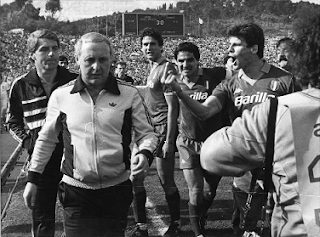 United, not only won the League in 1983, they went on to reach the semi-finals of the European Cup, losing out to AS Roma in a bitter encounter.

They also lost a UEFA Cup Final to IFK Gothenburg, in 1987 (having beaten Barcelona and Borussia Moenchengladbach on the way) denying McLean's team the sort of glory enjoyed by Aberdeen but establishing the Tangerines as a team of genuine quality.

Such success would not be long-lasting. The introduction of Graeme Souness, at Ibrox, with a bank balance to match his personality, saw the establishment of a dominance in Scotland that was Royal Blue. However, the success that McLean had provided was never acknowledged as being unsustainable by the relatively small body of United fans. Over the years, they grew increasingly frustrated - as did McLean - by the team's inability to emulate their greatest successes.

The pressure increased until McLean finally agreed to give up the job of manager and take charge of the club's administration, in his new role of Chairman, in 1993. However, the failure of the club to prosper under new leadership was as inevitable as the ability of the Old Firm to use their financial power and massive Scottish audience to ensure that future challenges to their dominance would remain the stuff of fantasy. For United, relegation followed, as did promotion, but the hoped for re-establishment of a third power in Scottish league football would not materialise.

The result was a challenge to the boardroom, through a campaign in the media. "United for Change" was the name of a movement, led by the Scottish politician, Lord Watson, and backed by some businessmen and naïve fans. Their promise was to deliver the impossible with a plan that was without realistic specifics. McLean resisted, his board supported him, and it appeared that the threat had been fended off.

However, one of the worst League records of modern times was more than the supporters could bear. Dundee United have failed to win a match since April of this year and their last home win was in 1999. Saturday's 4-0 home defeat by Hearts saw the inevitable protests outside the ground and McLean agreed to defend his position on television.

Unfortunately, the relatively benign questioning became too much for him and he struck out at the BBC's interviewer. Although remorseful, he immediately realised that his position was untenable and intimated his intention to resign.

McLean understands that his moment of anger required a self-inflicted punishment. But what must seem unfair is the extent to which his contribution to football has gone unrecognised. While acknowledged for his team's achievements, his observations on the game went largely unheeded. At the peak of his success, he insisted that his players would be paid bonuses on their entertainment value rather than simply their results.

He was describing football as a product long before the new breed of polished executives had turned their attentions from Rugby Union to the proletarian game of soccer. And, as architect of one of Britain's most successful youth policies, he preached about the need to protect young players as well as the danger of financially greater powers poaching the fruits of years of coaching labour from "provider" clubs.

In many ways, McLean was ahead of his time but his visionary statements went largely unheeded. Had he possessed the panache of so many modern, highly educated executives, the international reputation of an established coach, or just the credibility of an Old Firm manager (he once refused the job of managing Rangers), he might have been regarded as a football luminary.

As things stand, his association with Scottish football and Dundee United has ended in ignominy. His actions, on Saturday, may have been unforgivable but it is certain that, between the victim and the perpetrator, it is McLean's pain that will be more acute - and long-lasting.
Posted by Bernard Thompson at 18:36