10/08/00: Stanley Kubrick's "A Clockwork Orange" was dubbed "A nightmare vision of the not too distant future." That particular horror found its way onto the banned list in Britain but there is a danger of Scotland 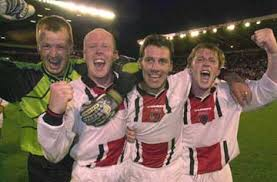 experiencing its own version when Bohemians play Aberdeen in the UEFA Cup.

In days gone by, drawing a side from the League of Ireland was a dream come true for any Scottish team. There would be no uncomfortable journeys into European backwaters; no need for the club to bring a chef for fear of being served the head of some domestic mammal; the supporters would enjoy visiting a country where their native culture was appreciated - and a win was a foregone conclusion. Aberdeen can expect to experience most of these pleasures but the latter is not assured.

The Dons go into the tie under greater pressure than any Scottish team, entertaining an Irish side, has known. Recent years have seen Celtic and Rangers tackle St Patrick's Athletic and Shelbourne respectively, and discover that the gulf between the League of Ireland and the Scottish Premier League appears narrower than it has ever been. Shelbourne, especially, caused uncomfortable moments. Such hiccups invariably furrow the brows of Scottish football's critics.

There are easy parallels to be drawn between Scotland and its near neighbour. But that proximity leaves Ireland within pointing distance of those who see a Scottish game in decline. Unpalatable as it may be for followers of Irish domestic football; the League of Ireland is held as an example of the catastrophe that could befall the Scottish League.

So when the Dons and the Bohs clash, it will not simply be a friendly inter-Celtic rivalry that will be at stake but a measure of the health of Scottish football as a whole. And Aberdeen are in a poor condition to bear the nation's standard.

Having finished at the bottom of the League last season, their Chairman, Stewart Milne, was unable to provide Ebbe Skovdahl with the funds to continue his squad rebuilding. Their precarious position has been exacerbated by injuries to Thomas Solberg, Russell Anderson and Derek Whyte, requiring Skovdahl to recruit ex-Dons defender, John Inglis, on a temporary contract.

Skovdahl, who endured continual jibes last season as his team was branded the worst in Europe, has a thankless task but he meets cheap remarks with dignity and Confucian wisdom. If Roddy Collins thought that his digs regarding Skovdahl's age would irritate him, he would have been better to devote his attentions to the job on the field rather than target a man who is undeserving of such disrespect.

Bohemians may have a real chance but the fitness of Aberdeen's Moroccan's Belabed and Zerouali (who wears a zero on his back), combining with Arild Stavrum, can give them a potent goal threat.

However, the issues in this game extend beyond the two protagonists. Despite their poor league form in recent years and their failure to buy since last season, Milne continually emphasises that outside of the Old Firm, Aberdeen spend more than any Scottish club each year.

Potentially, they are the third most powerful club in Scotland and the success brought to the North East by Alex Ferguson is not forgotten. So losing to a team from the League of Ireland would lead to a poor prognosis for the future wellbeing of Scottish league football.

On their best form, Aberdeen can win but, if ever a Scottish team was in danger, in such a tie, it is now. Skovdahl has the nerve - and many still believe, the knowhow - to repair the damage, even of a defeat by Bohemians. But has the Scottish game?

Posted by Bernard Thompson at 18:53